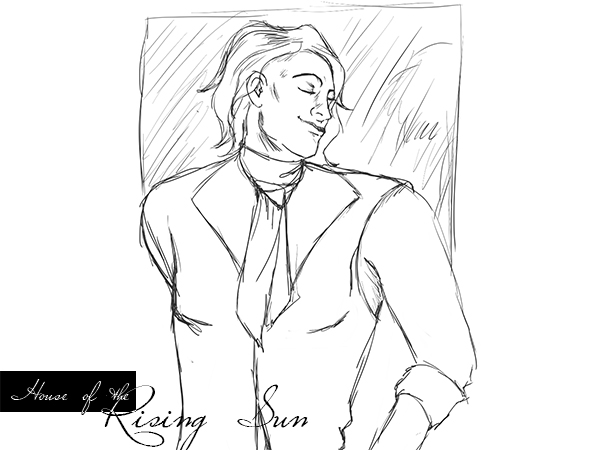 The window Charlie was looking out rattled, as probably every window in the entire estate as a door slammed above.

“What d’you think that’s about?” Sev asked from the place where he lounged on his bed, a book propped up on his stomach, wrinkling the silk of his waistcoat. Charlie tipped his head to the side and shrugged. Leo was home and he’d just gotten back from the FitzChivalry estate. It could be anything. Vivi was a powder keg whenever their brother was around. He’d suspected that something was–wrong–between Leo and Vivi probably before Vivi and Leo suspected that something was wrong between them.

Their parents, when they were around, were the very picture of loving care and parental concern. The problem had been that they hadn’t been around that much. Their mother spent far more time at court with the queen than here with them. Their father sometimes disappeared for weeks on end with no word as to where he’d been or when he’d get back. It wasn’t unheard of, lots of kids in their class were in the exact same boat. Or worse, their parents were never around and didn’t even care about them on the rare occasion that they were.

Still, if the Ferriera blood carried one thing over the year, it was passion. Loyalty was given absolutely, and once a Ferriera loved someone, it was nearly unshakable. Even when it probably should have been shaken. It had cost them a few times over the years. Vivi had been Leo’s pet pretty much since she had been born. Her first word was his name. Anything that Vivi had ever wanted, Leo had made sure that she had, sometimes even begging pocket money off his brothers, even at Charlie’s outrageous level of interest, to make it happen.

He imagined it was pretty heady stuff, having someone worship you. To know you could ask almost anything of someone and they would do it–somehow. The only thing that Leo had ever seemed to want from Vivi was her to be happy. He was content with that. Then somewhere, somehow, a line got crossed. A point of no return. And suddenly what had started as sweet, mostly an emotional shelter from the storm, became something it shouldn’t be. Maybe it was a societal thing. Leo, after all, was almost the stereotype of a “leading man”. Tall, handsome, with picture perfect manners and even the fiery disposition that was called for in books and theater. Pair that with parents who weren’t there, the knowledge that she was to be married off to some bloke her parents picked because they thought it was a good idea. Maybe it did make some sort of twisted sense.

“Finding all the answer to the universe out there?” Sev asked, sarcasm tinting his voice. Charlie laughed. If only the answers to the universe were out there in the reflection pool or the carefully tended rows of hedges and their mother’s prized purple roses. What was the answer to life, the universe, and everything? Forty-two, a voice seemed to whisper in his head. Whatever that meant.

“Nope. Just thinking.” Charlie tossed a stocking at his brother. He needed to ask the upstairs maid to come in and clean up Sev’s side of the room again. He’d ask his brother but the likelihood that his brother would actually clean anything was remote. The two of them could have had their own rooms, that was one thing the estate certainly was not lacking. But Charlie supposed that this was, in part, his way of dealing with the same issues that Vivi and Leo had. Sev wasn’t his everything, not by a long shot, but some nights, the only way he slept was closing his eyes and waiting for his breath to sync with Sev’s.

“Hey, Charlie?” The double doors popped open and Leo stuck his head inside. Leo’s eyes were dark, not a good sign, and there was a stress crinkle between his brows.

“You finished with my philosophy text?” A hundred questions piled up in his throat, Leo wasn’t the type to work out temper by reading a book, certainly not a text book.

“I can be.” Charlie said, moving over to his desk, picking the leather bound volume out of the neat stack by the inkwell.

“Thanks, I’d leave it for you to read, but I’m heading back to Camford tonight.” Charlie and Sev shared a glance. It was after tea. To even make it to the Lothianshire High Cross tonight, he’d have to ride well into dark or cruelly push his horse.

“Aye, I should probably get out of River Sulis before someone else never wants to see me again. I’ve already got Vivi and Caroline saying it.” Leo sighed, tossing the book in his hands. “Not to mention what I’m sure Lady Henry will be sending over for me breaking her poor daughter’s heart–as if she has one–and our betrothal.”

“Wait, what?” Sev asked sitting up and staring hard at their brother. “You and Caroline broke your engagement?”

“Aye. She wants the Rances to lose their estate so her father can have it. I just can’t with her.” Leo shook his head.

“Is that over her coldhearted lack of regard for her own kin or that her understanding of political succession is so poor that she thinks it’d work that way?” Charlie asked curiously. Sev and Leo both looked at him for a long moment. “It’s a valid question.” Charlie defended.

“More the former. I had long since figured out that her understanding of anything of consequence was limited at best. And even if I hadn’t, Vivi is always reminding me of it.” Leo said leaning against the wall, shaking his head.

“So what went wrong with Vivi.”

“Who knows?” Leo asked. “I actually had just told her that she was right.” Charlie looked sidelong at Sev who shook his head. “I don’t get it.”

“Maybe…” Sev trailed off. Charlie gestured for him to continue, if he had an idea about why Vivi would respond like that, it was better than anything Charlie had. He’d have thought that Vivi would have been happy to know she was right. “Maybe it was the way you found out that she was right. She’s been telling you for years, right? But it took Caroline being incredibly stupid for you to listen to her.”

“I was listening to her!” Leo protested. “I just didn’t think that her being–not bright was worth breaking my engagement to her. I mean lots of men marry women who are not–that smart. In fact there are lots of people who believe that it’s better not to marry a clever woman.”

“I don’t know.” Sev said with a shrug. “Girls are complicated.”

“Yeah. Well, I’d better get going.” Leo sighed. “You know how the Remans are. If I give Lady Henry too much time, I’ll be dodging Reman bounty hunters all the way to Camford.” He laughed without humor.

“Whoa.” Sev said, pulling his legs up onto the bed and looking at Charlie. Charlie nodded in agreement. “Should we draw straws?”

“Which of us should go brave Vivi in her lair?” Sev pushed a hand through his hair. “Someone should talk to her.”

“Do you really think she’ll want to see one of her brothers right now?” Charlie asked, unconsciously mirroring Sev’s position on the bed. “I would think that one of us would be toward the bottom of that list actually.”

“Well, I don’t know that she’ll really want to see either of us, but I do think that someone should go talk to her. And I also think that we’re the best she has. Dad’s gonna be busy with fallout. Mum’s not here. Marianne would be a better choice, but it’s not like Lady Henry’s likely to let her come over here anytime soon.” Sev paused, his throat working for a moment as he thought about the implications of that. Charlie hid a smile by laying his head on his knees before it faded. He might be stuck in a house of people with broken hearts. That ought to be fun. “Somehow I don’t see Elizabet being any more help on this subject. She’s a little too prone to telling people she told them so. That pretty much leaves us.”

“Right.” Charlie pursed his lips thoughtfully. “But–um–couldn’t we let her calm down a little more before we head up there.”

“The man who knows when to hide lives to cower another day.” Charlie smirked. “Besides there’s nothing we could say right now.”

7 thoughts on “House of the Rising Sun”