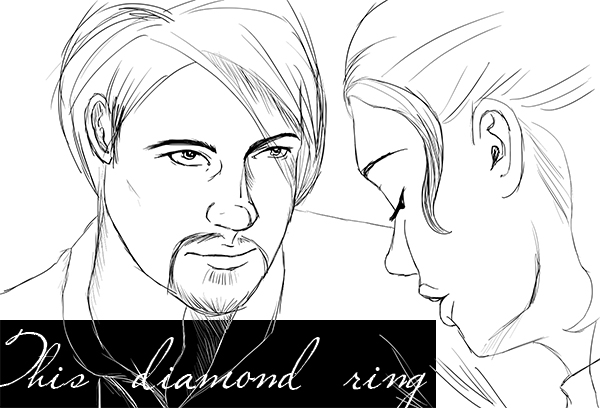 The summer sunlight streaming in the windows hit Caroline’s tinted hair, exaggerating the brassiness of the tinting and highlighting the sallow color of her face over the mourning dress that Katherine insisted she wear. The forced laughter didn’t help any. If he lived to be ninety, Brandon would never understand why Katherine insisted that Caroline and Leo be chaperoned. All they ever did was sit and have awkward discussions until one of them lost their tempers. Then one of them would stalk off and sulk and the other would go home.

It was usually Marianne who was stuck with watching this sad pantomime. But she had protested that she had plans to meet “a friend” at the library this afternoon when Katherine had announced that Leo would be coming over and that she was expecting Marianne to chaperone. Well, it was phrased as a request, but all of the Fitz-Chivalry children knew when their mother said something in that tone, it was a demand and it would do them no good to protest it.

She’d looked so disappointed that Brandon had heard himself volunteering before the words had really even finished leaving Katherine’s mouth. Marianne had looked so grateful that he hadn’t even felt bad about subjecting himself to an afternoon of torture. At least until the torture started. He thought as his eyes flickered up over the top of the book that he was using as a shield against his sister and her inane chatter.

Even now, though, it wasn’t that he was upset at Marianne, she suffered through this every time Leo came around, no, he reserved that for his mother who really thought that this madness was necessary. Leo wasn’t going to ravish Caroline on the parlor sofa with their father in his study in the next room. First of all, he couldn’t imagine any of the Finessas ravishing anyone, which was why he didn’t have too many concerns about the fact that the “friend” Marianne was probably meeting at the library was probably male. And he’d have laid pocket money it was Severus, who probably would have genuflected at Marianne’s feet with more seriousness than at the altar.

Second of all, Henry was in the next room and if Caroline so much as coughed uncomfortably, he’d stick his head out the door to see what was going on. And thirdly, Leo wasn’t stupid. Not to mention that Leo didn’t even seem to want to kiss or touch Caroline, so ravishing her on the sofa was probably as likely as a fae becoming an ironsmith.

So far they’d covered the weather and Leo’s classes at Camford and whether Caroline was enjoying her Hybel break. It all made one of Brother Loki’s lectures seem like a night out at the tavern.

“Um, I think that my mother mentioned that Lord Rance was–a cousin of yours?” Leo said, obviously grasping at straws for something to talk about.

“Well, a second cousin of my mother’s, I think.” Caroline’s eyes flickered in Brandon’s direction and he made a show of turning the page in his book, the last thing that he was going to do was help Caroline out here. If it had been any of his other siblings, he probably would have, but even at Edmund’s most annoying, he held no candles to Caroline. She was on her own here.

“I’m sorry.” Leo said running his finger over a crease on his breeches.

“Er. I–I guess?” Leo said awkwardly staring at the arm of the sofa.

“Your father does–something for the king, doesn’t he?” Caroline asked cocking her head to the side.

“So does yours.” Leo said, eyes narrowed slightly.

“Well, aye. But Daddy does stuff for the king in Reme, not in Albion, I was just wondering if–if your father had said anything about Garth.” Caroline asked.

“Nothing…” Leo looked hard at Caroline. “Why?”

“Well, I heard that the council wouldn’t want Adelina for Richard’s guardian because of Rance being near the Reman border.” Caroline said. Brandon frown slightly. Why would Caroline be listening to something like that? Caroline had less interest in politics than pretty much anyone else Brandon knew.

“That–may be.” Leo sounded guarded. “So you’re hoping that they find him?”

“If they don’t find him–doesn’t that mean that they would have to move Rance’s estate to–someone else?” Caroline pressed. Brandon’s eyes flew wide as he figured out what Caroline was asking a half moment too late to stop her from saying anything further.

“Wait–are you saying what I think you’re saying?” Horror crossed over Leo’s face. Unfortunately Caroline, being so shallow if she were a puddle you could cross it in stocking feet and not get your stockings wet, could hardly be deep enough to be saying something else.

“It’s not that I’m hoping they won’t find him, but if they don’t, somebody’s got to attend the estate, if the Rance’s can’t, then there are people who could.”

“I cannot believe, Caroline!” Leo gaped. “I know you want your father to be granted an estate, but to hope that your own kin lose theirs because your father might get it is repugnant.”

“What is repugnant about practicality?” Caroline asked as Brandon mimed for her to stop.

“You wouldn’t know practicality if it bit you in the arse!” Leo’s tone rose sharply.

“Do not swear in front of me, sir!” Caroline gasped.

“That is the very least of the profanity I would like to use directed at you right now. What kind of self-centered bitch would even think that? Certainly not one I would ever care to marry.” Leo climbed to his feet staring down at Caroline.

“And no gentleman, and I do use that term quite loosely, I would care to marry would ever use that kind of language in front of a lady.” Caroline also rose.

“It certainly doesn’t matter. I wouldn’t marry you under any circumstances. Vivi was right about you.” Leo snarled at her.

“Of course, go hide behind the jealous convictions of your precious little Vivianne.” Caroline planted her hands on her hips and sneered.

“Why would Vivi be jealous of you? You’re stupid, rude, self-centered with a mind too shallow to drown a worm in.” Leo said, throwing his hands in the air and storming away. “My father will contact yours about dissolving the betrothal contract. Good day to you, Miss Fitz-Chivalry.”

“Good day to you!” Caroline called before dissolving into tears and throwing herself on the settee. “MOTHER!” Brandon stared at his sister then at the ajar parlor door.

“Brandon?” His father’s voice came from the study door, barely loud enough to hear over Caroline’s hysterical crying. He turned and walked into the study, shutting the door after him when his father mimed for him to do so.

“I am sorry, sir.” Brandon sank into the chair.

“Don’t be. I could hear well enough that I could have interceded if I really thought that it would help anything.” Henry sighed and picked at the cuff of his shirt. “This thing has been falling apart for long enough that I was almost expecting this. Maybe if I move quickly I can repair relations with the Finessas, though I’m certain that your mother will want all contact with them cut off as of immediately.

“But–if we cut off all contact with them–won’t we be losing our chance at ever becoming ennobled?” Brandon asked. “With the close ties that the Finessas have to the crown?”

“Quite possibly. We do live in a monarchy and no matter how much we like to pretend to be above nepotism, it does still exist.” Henry steepled his fingers and stared at the ceiling for a long moment. “Your mother–I hate to put it this way–but your mother is Reman. And the only thing more important to a Reman than power–is revenge.” He sighed. “I have worked in the Reman court too long not to know that. Right now, to your mother, cutting ties to the Finessas for their supposed slight to Caroline will be far more important than whatever help being in good relations with the Finessas would put us in for eventually being ennobled.”

“So–what do we do, sir?” Brandon asked with a wince to the particularly shrill pitch Caroline’s sobbing hit in the next room.

“Well, truth to tell, this couldn’t have come at a worse time, I received a dispatch this morning, I’m going to have to go to the embassy in Reme for a month, six weeks maybe, to hopefully keep the Remans from poking too many sticks at Rance until Garth can be located or another suitable guardian instated.” Henry admitted with a sigh.

“… The Lord Wright has a very peculiar sense of humor, doesn’t he, sir?”

7 thoughts on “This Diamond Ring”