I wish she’d come walking over. Now I’ve been waiting to show her, crimson and clover, over and over. 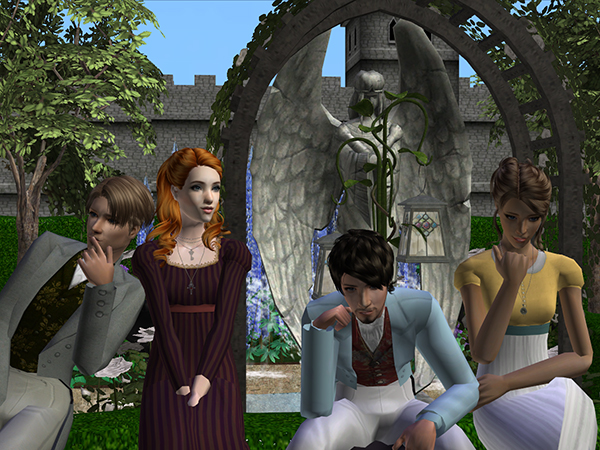 Tawny twisted her hands around each other, her teeth cruelly locked around her bottom lip. She didn’t know why she was so nervous. All she was doing was meeting a friend of Annette’s who taught piano lessons. That was all. Maybe it was the fact that Miguel was not particularly enthusiastic about the idea of her taking the lessons in the first place. But for Wright’s sake, she was a sim. She needed something to do other than think of new and different ways to seduce her drunken husband!

That was more or less all she’d done for the past six weeks and they were so sick of seeing each other naked that she was about to take a blindfold to his bedchamber. Tawney released her hold on her lip to quirk them up into a something that was almost a smile, remembering what Annette had said when she’d told her that.

“If you don’t like Curran, you can find another tutor.” Speaking of the Grim, Annette appeared out of the nowhere as she frequently did.

“So what is it?” The redhaired woman asked, green eyes fixing her in place. Though they weren’t cat-like in color or shape there was something somewhat sharp in them that reminded Tawny of a cat. Not even a housecat, once–when they were riding in the carriage to visit a family friend–they’d seen a mountain lion basking on a rock. The look in it’s eyes when it raised it’s head and looked at them sleepily was a lot like the look in Annette’s eyes. Wary confidence. The more she got to know Annette the more she was reminded of something that one of her tutors had liked to say “You can stick a hawk in a songbird’s cage, but that doesn’t make it a songbird.”

Annette played the role of the songbird grudgingly, but she wasn’t one.

“And I already know that Miguel probably doesn’t like it, but despite what he’s thought previously, having a wife who is completely dedicated to getting knocked up seems to require a lot of him. He doesn’t like that either. I’m not sure he likes anything.”

“Himself, maybe.” Tawny said before clamping a hand over her mouth and looking horrified, she hadn’t meant to say that outloud.

“Nah, I doubt he even likes himself, look at how much he drinks.” Annette said cheerfully. “And I don’t blame him, if I were him, I wouldn’t like me either.” Tawny giggled behind the hand still clamped over her mouth.

Letting her guard down around Annette was one of the smartest things that Tawny had done in a long time. It was hard pretending to be the kind of girl that her mother had wanted her to be. And while that seemed to be held up as some sort of ideal, people didn’t really like you if you’re shallow and self-interested. And trying to pretend you only had your husband’s interests worked about as well as square carriage wheels when your husband had no interests. Besides himself–and wine–and bad clothing.

A knock came at the door and Annette shot her a smile before heading to the door. Tawny folded her skirt in one hand and stared at the blue floral paper on the walls. It had been beyond kind of Annette to volunteer her house as a neutral meeting ground for this. She’d have to think of some way to help Annette later. She was a lot better friend than Tawny knew how to be back.

There were two men following Annette when she returned, both tan, one with light brown hair in a very similar shade to her own, though he didn’t look mousey with it, the other dark haired with a very shy smile and candid gray eyes.

“Tawny, this is Kevin Finnegan,” She gestured to the brown-haired man. “He’s the artist who painted that portrait I sent to my mother.”

“Pleased to meet you, you’re very talented, Mr. Finnegan.” Tawny said. Mr. Finnegan had an infectious smile, as she felt the corners of her lips being tugged up almost unconsciously in response.

“Of course, I’m the best painter in River Sulis, just ask anyone.” He winked a blue eye at her.

“Hey, hey, space in here is limited, I’m not sure we’ve got room for you and your ego, Finn.” Annette told him.

Apparently ignoring that, he turned back to Tawny. “It’s a pleasure to meet you, Mrs. Cox. And you’re welcome to call me Kevin or Finn rather than Mr. Finnegan if you wish. I try not to stand on formality.”

“Because your ego’d knock you off it if you did.” Annette wrinkled her nose at him when he turned a mock glare at her. Something about the way that Annette almost smiled, the way her shoulders seemed a little less set decided for Tawny that he’d be Kevin to her, anyone who could get Annette to unwind, even just a little was obviously worth knowing.

“Annette’s told me a lot about you.” Kevin continued.

“She was uncertain about you at first, but it’s gotten a lot better recently. Besides I’d take all her bad-mouthing with a grain of salt anyway. You’re married to the illustrious Captain Cox of the River Sulis guard–and you haven’t smothered him in his sleep yet, that tells me you’re probably a saint in disguise.” Tawny covered her smile with her hand.

“And if Finn would quit running his mouth, I’d introduce you to the person who you actually expected to meet today.” Annette said shaking her head. “Anyway, this is Curran Hamilton. Piano tutor extraordinaire. Curran, this is Tawny Cox, my–cousin-in-law, I guess. And a friend.”

“A pleasure to make you acquaintance, Mrs. Cox.” The hither-to silent young man said with a formal bow.

“And yours, Mr. Hamilton.” Tawny said. “Though–I don’t suppose we have to stand on ceremony either.”

“I wouldn’t presume. Some people like ceremony, my mother for one. There’s not a ceremony or formality she’s met that she hasn’t liked.” Curran ducked his head, not entirely hiding the shy grin quirking his lips.

“He’s right, Mrs. Hamilton’s written the book on formality for the sake of formality.” Kevin said solemnly. “I’m pretty sure that Curran’s father called his wife Mrs. Hamilton from their wedding to his death by henpecking thirty-four years later.” Annette snorted and Curran shook his head.

“Well, unless you’re fond of formality for the sake of it, you’re welcome to call me Tawny.” She said, extending a hand to him. He took and bowed over it, causing a faint bit of color to rise in her cheeks.

“And please, call me Curran.” Curran told her when he looked up, their eyes locking for a moment.

“Well, there’s the piano if you want to dive right in.” Annette said sitting down in her chair, a cat with a bowl of cream smile on her face. “It’s even tuned.”

“Thank you, Annette.” Tawny said. Curran pulled the bench out for her and she sat on it, smoothing her skirt in a nervous gesture.

“Sit up just a little,” Curran suggested, “But keep your shoulders relaxed, it’s a piano, not a firing squad.” She did as he suggested, he pulled a sheaf of music out of his bag and set it on the wooden music rest.

“This is the C major scale.” He quickly and easily tapped out the keys, managing somehow to lean over her shoulder without it feeling like he was hovering over her, which was kinda amazing, considering Miguel could hover over her from clear across the room.

“So what did you think?” Annette asked after Curran and Kevin had left.

“He was–very nice–and I think he’ll be a good teacher.” She added the second part in a rush as if saying that Curran was nice was somehow leaving something hanging that she really ought not to leave. “I liked Kevin too.”

“Not–exactly. We are friends, he is someone I can talk to and he’ll listen and understand as best he can. And he knows that being friends like we are is all I can offer.” She sighed and sat down in her arm chair.

“I meant you’re sleeping with him.” Tawny covered her eyes. “I’m sorry, that was out of line.”

“I think, considering the first few conversations we had and how you reacted to them, you’ve spent too much time around me.” Annette looked up at her, eyes shadowed. “Yes, I am.”

“I like him. Not that that has anything to do with anything.” She stubbed her toe at the carpet.

“No, but it’s nice to hear. No one ever says it about Masen. Then again, I’m not sleeping with Masen, so…” She trailed off with a shrug.

“You–,” Tawny sat down on the settee and looked at her for a long moment. The sunlight coming in the window set off the paleness of Annette’s skin, making the copper of her hair shimmer like metal. And just like that it was back, the marble-and-metal armor that Annette always kept around her.

And just like that–Tawny’s whole life seemed to spread out in front of her–if she did succeed in having a child with Miguel in a decade she’d be where Annette was–even her closest friends at arm’s length, wrapped up in armor and and respectability.

“How do people do this?” Tawny whispered, as reality crashed down.

Annette didn’t seem puzzled by the non-sequitur. “The same way they do anything unpleasant, all the other choices are worse. C’mon, it’s not all bad. And it’s better when you can remember the good stuff, too.”

4 thoughts on “Now I don’t hardly know her”