A little girl came through the front gate holdin’ a fishing pole. His dad looked down and smiled, said we can’t leave her behind. Son I know you don’t want her to go but someday you’ll change your mind.

Eric stood up as he heard the unfamiliar clatter of horse hooves stopping outside. He was used to hearing them continue on down the street toward Sara-Beth’s by now, but he wasn’t used to hearing the sound of a horse being tied up to his post box. His mouth was a little dry. Johnny might have been a bit more troublesome at home, but Anna-Marie was all spit and spark like her mother without her mother’s natural sense of when to cut it back. 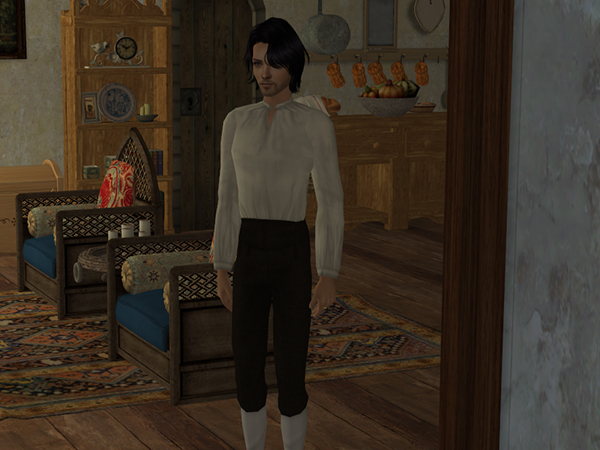 She was absolutely fearless when she thought she was on the right track–and he worried for her so much. His heart leapt a bit higher into his throat when he heard the familiar clatter of slippers running across the front enterway, followed by a slower yet equally familiar gait–Darin’s–following.

About half a heartbeat later, he was sure it was a half, he was paying very close attention, Anna-Marie burst through the door and without even acknowledging him, tore off in the direction of her bedroom, the door shutting with a slam he hadn’t expected to hear for another five years yet. 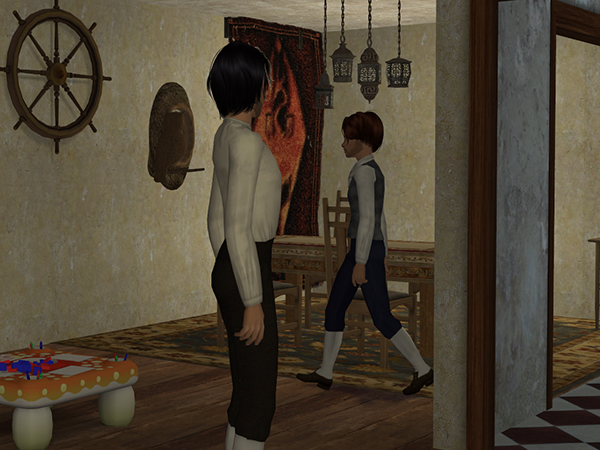 Darin paused for a moment to shut the front door, but then turned toward Anna-Marie’s room. He glanced down at his hands, obviously avoiding Eric’s eyes, and muttered something that sounded like “Sorry, Mr. Osmont.”

Eric took a moment to remind himself to breath and hurried immediately to Anna-Marie’s door. He hesitated for a moment before knocking. Anna-Marie didn’t say anything, he looked over his shoulder at Darin who shrugged. Eric had always wanted to be a parent who could allow his children as much privacy as he could. But sometimes it was more important to be papa than to be polite.

If his baby-girl was in there crying, then obviously Papa was needed more than the manners his gram had beat into him one ruler across the knuckles at a time. He opened the door. Anna-Marie had flung herself across the bed, her hair like a black waterfall trickling over the edges and falling down toward the floor.

“Little bear?” Eric asked softly. It took about as much time as two blinks for her to push up off the bed and launch herself into his midsection with a thud that knocked the wind out of him. She clung for about an exhale before leaning her head against his torso. His daughter was shivering with reaction and if he was any judge just about to– 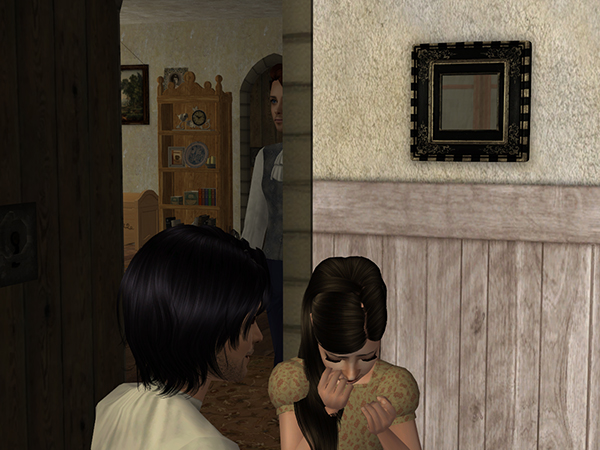 She covered her face with hands that shook like dry leaves in a windstorm and sobbed.

“Oh, baby. My little bear, my poor little bear.” He murmured into her soft hair as he squatted down to hold her. “Papa’s here.” He told her. “Whatever it is, it’s okay.”

“Anna-Marie, we can’t just ask!” Elias said tugging on her sleeve, pulling her around to face him. It was the first morning of Hybel break at school and it had dawned hot, muggy, sticky, and a general slice of something that just lacked a few cow demons to make it Hell. And everyone knew that the best way to spend hot, muggy, sticky summer days was fishin’–and everyone equally knew that the best fishin’ was at the pond in the big park that the nobles rode their horse ’round.

Only problem was they weren’t actually supposed to go fish there. It was the nobles park and that was just like the nobles, they didn’t even fish at that pond, but it was theirs and so nobody else was supposed to use it. But she knew–mostly because Sara-Beth had been griping to her mother as they’d done their washing–that Darry was supposed to be going riding at that very park with his friends today.

“What does it hurt to ask?” Anna-Marie asked, looking at Starla and Bronx for confirmation. Starla shrugged. She would, she was terribly wishy-washy, whatever way the tide goes, that was what her mama said. Bronx just looked sad–and scared–and like he was about to cry. She’d mostly invited him along because he looked like was going to cry. And Starla’s bleeding heart started bleeding all over the place as Anna-Marie’s mama liked to put it and she had insisted that they had to make him feel better.

Well, given that he wouldn’t talk about what was wrong–beyond the fact that he was Romeo’s brother–she’d probably be pretty sad if she were related to Romeo too. 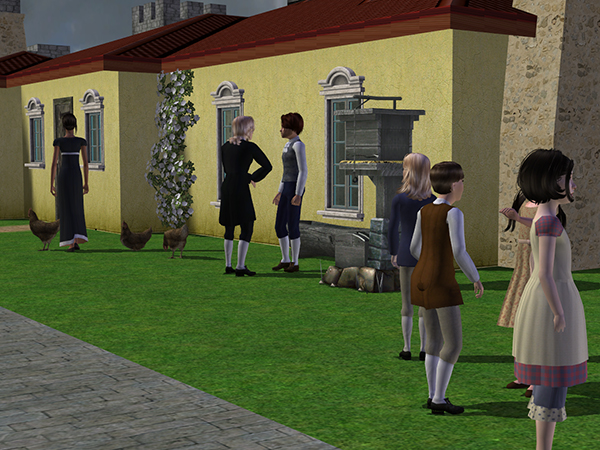 “Who is that?” Starla whispered, pointing toward the blonde man who had his back toward them at the moment.

“Don’t. Be. A. Chicken.” Anna-Marie said. “Nothing ventured, nothing gained.”

“Huh?” All three of the others looked at her in puzzlement.

“I think it means if you don’t try, you won’t get anything.” Anna-Marie said after a long moment.

“Where did you hear it said that way though?” Bronx asked. Anna-Marie thought for a moment. Where did she hear that said? She just remembered hearing it somewhere and she thought some lady had said it. 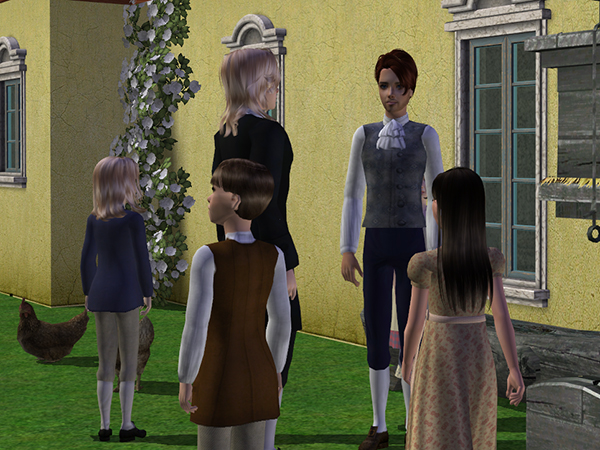 “Dunno. Look, they’re done talking, now let’s ask before they leave. The worst that can happen is they say no. And ‘sides, Elias, the only way to get permission to go fish in the nobles’ pond is to ask a noble, and I dunno about you, but I don’t know that many nobles.” Elias didn’t look convinced, then again he usually didn’t look convinced by Anna-Marie’s logic, but they moved up toward where Darry and the blonde man that Anna-Marie thought was Lord Joshua stood.

“So, um, are you gonna go ride horses?” Anna-Marie asked looking over at the two saddled horses picketed by the street. 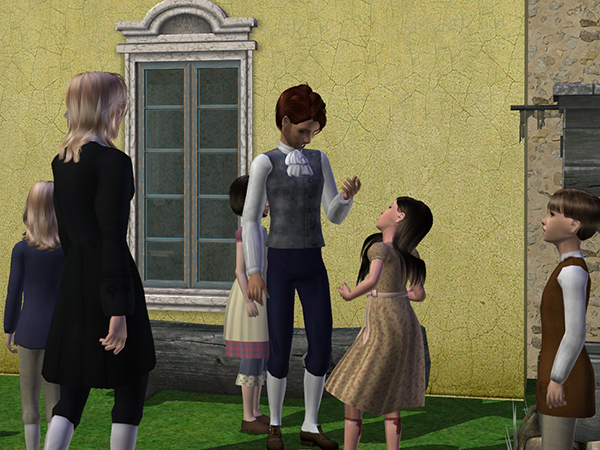 “I believe that was the plan.” Darry told her. “Why?” Darry was probably one of those people that her mama would say knew her too well–whatever that meant.

“Cause I was wonderin’–we wanna go fishin’.” Anna-Marie offered.

“Uh-huh.” The corner of Darry’s lips was poking up as if he were starting to smile a little.

“An’ you know that the best fishin’ is at that pond on the riding grounds.” She added in a hurry.

“It is?” Lord Joshua asked, his voice bewildered. Darry nodded with a smirk. “And you know this how?”

“A holdover of a misspent youth.” Darry shrugged with a grin. “Anyway, your point?”

“Mama says we’re not ‘posed to go without permission of a noble–and Mister Lord Joshua is a nobleman, right?” Anna-Marie shot a look at Lord Joshua who–rather like Darry–looked like he was trying to keep from laughing.

“So what you want is permission to go fish there?” Darry asked, his eyebrow arched upward. Anna-Marie nodded so fast her hair bounced and made weird little noises when it hit the back of her dress.

“I don’t see why not.” Lord Joshua drawled. “Seems like you are the only people fishing that pond anyway.” He winked at Anna-Marie who blushed for some silly reason. “I’ll let the caretaker know that you and your friends have permission and not to run you off if they see you there.”

A whole summer of the best fishing in the whole town and even Anna-Marie’s mama couldn’t argue with it. Anna-Marie threw her arms around Lord Joshua’s middle and gave him a tight hug. It sorta felt like he had several rocks shoved into the front of his shirt, it was that firm.

“Seeing as we’re all going the same direction.” Lord Joshua said after ruffling Anna-Marie’s hair. “Why don’t we all just go together.”

“I can’t walk as fast as a horse.” Elias muttered toward his shoes.

“We’ll walk the horses and you guys can ride.” Lord Joshua said as their eyes all lit up.

Anna-Marie grinned as she grabbed a worm and skewered the squirmy thing on her hook. Darry’s friend, Brandon shook his head. “What?” Lord Joshua asked from where he letting his horse drink out of the pond by where Anna-Marie stood. 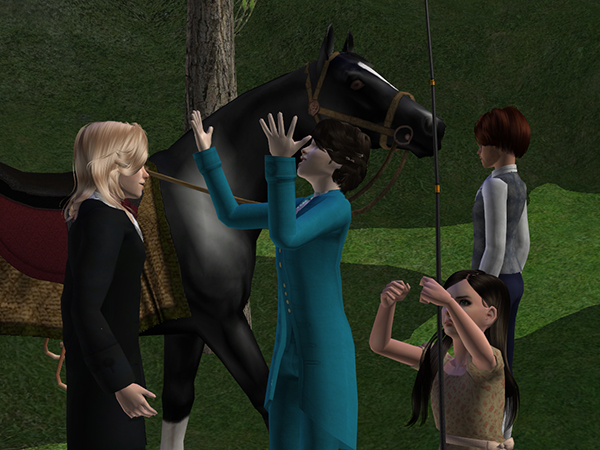 “Just I have a little sister about Miss Anna-Marie’s age and I could never imagine her–ever–under any circumstances touching a worm, let alone skimming it onto a hook.”

“How does she fish?” Bronx asked.

“She’s a lady, I think my mother would have apoplexy and die if her daughters–any of them–ever fished.” Brandon said as Darry and Josh laughed.

“Well then, tell Marianne she needs to take up fishing, maybe between the poker and the fishing your mother will have that fit. Not that I wish her dead–but Sara-Beth says that sometimes apoplexy can cause people to be struck dumb–which I might wish on your mother–it would keep her from constantly calling me “the scholarship boy” like it’s my name.” Darin leaned against the black horse that Starla and Bronx had ridden up on. 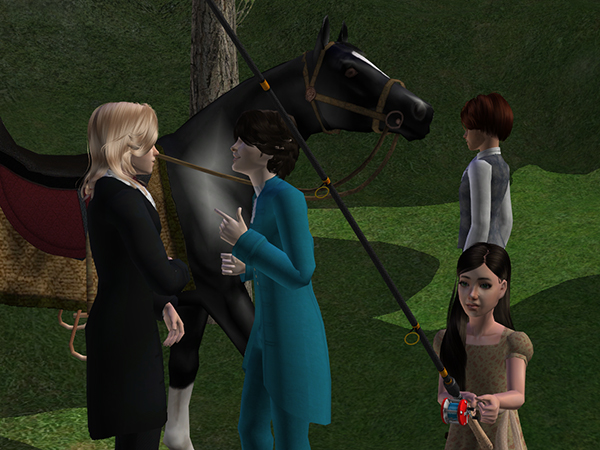 “Somehow I don’t see it.” Brandon said. “But speaking of Marianne. She wanted me to tell you that she hoped Elizabet was feeling better.” Lord Joshua blinked and stared at Brandon.

“Aye, your father sent over a servant that said that Elizabet was feeling under the weather and so they’d have to cancel their ride this morning.” Brandon told him.

“Bet was feeling fine, in fact she left at the same time I did.” Lord Joshua said.

“I saw the boy myself and heard the message. It was the little dark-haired boy your mother usually uses as a page.” Brandon said. 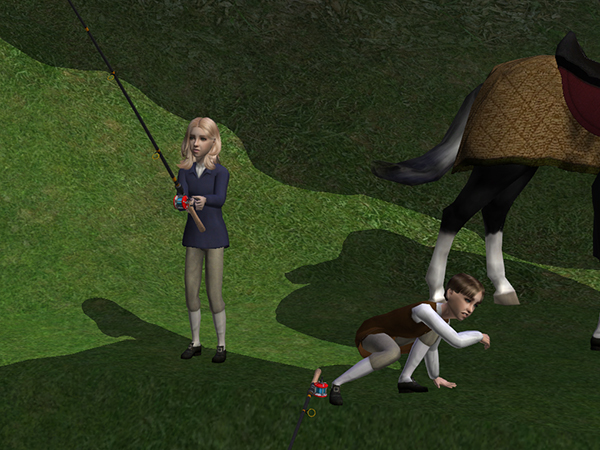 Obviously paying more attention to the conversation behind him than his fishing pole, Elias managed to hook his shirt collar with the hook and yank himself over. “Do not tell your brother about this.” He said, brushing off his butt and glaring at Bronx, who dropped his eyes to his shoes, looking about like he was going to cry again.

“I don’t tell my brother nothin’.” He muttered. “And I certainly wouldn’t tell him nothin’ that’d let him make fun of me or nobody else.” Elias glanced down at his own shoes and muttered something like “sorry” to them.

Starla, who actually was making the best accounting of herself–even if Anna-Marie would almost have pegged her the kind of lady that Brandon said his sister was–reached out and patted Bronx’s shoulder. 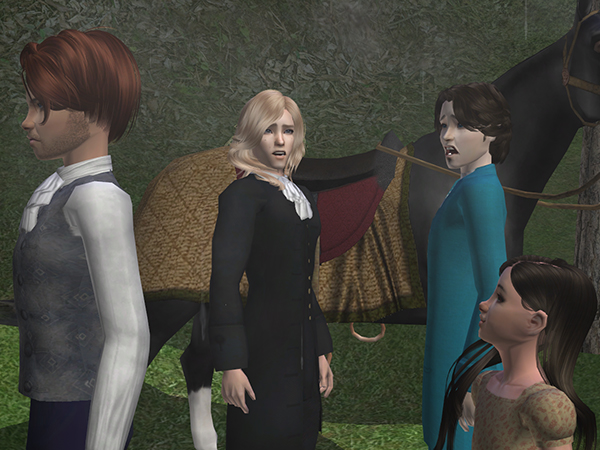 “Why would my father send a servant over to your house that Bet was sick, though, if she’s not?” Lord Joshua had about enough time to wonder before he heard it–they all heard it. The sound of a girl’s terrified scream and just the time to take a breath later, a sharp crack of thunder close, very, very close.

“Elizabet!” Lord Joshua screamed, a look of horror shot across his face as rain seemed to be ripped from the sky.

“Who is dead?” Eric asked, stroking Anna-Marie’s hair and rubbing her shaking shoulders. One of her friends? Someone Darin knew? Who? 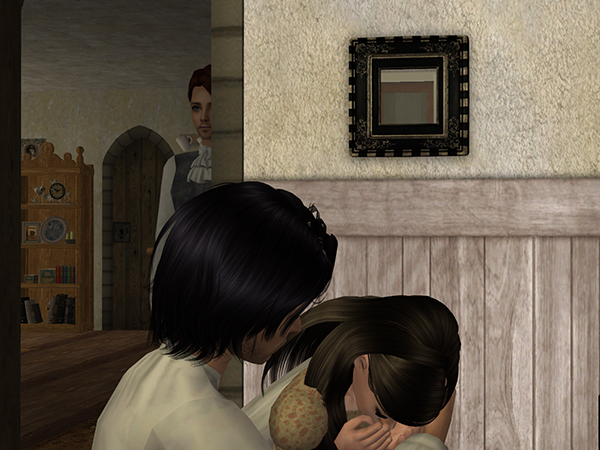 “The–the man from church.” Anna-Marie said. “On Sunday. The man who was with the Baron at church.”

7 thoughts on “Don’t Take the Girl”